In a Rear-End Collision in Virginia, Is the Driver in Back Always at Fault? 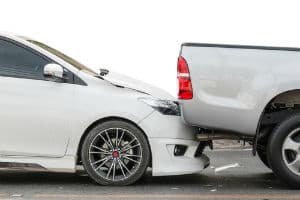 Rear-end auto accidents in Virginia often result in whiplash and sometimes more serious, or even life-threatening injuries. According to the Mayo Clinic, rear-end crashes are one of the leading causes of whiplash.

If you are involved in one of these crashes, your question will be: Who is at fault? Most drivers assume that the person in the back — the driver who rear-ended the other vehicle — is always at fault. However, in a number of scenarios, other parties may be responsible.

To better understand fault in rear-end collisions in Virginia, let’s take a closer look at the laws in our state and how they might apply in different scenarios.

According to The Washington Post, around 1.7 million rear-end car accidents occur every year on roads across the country. About 1,700 people suffer deadly injuries annually from these rear-end collisions, and approximately 500,000 passengers sustain injuries that are not fatal.

While officials from the National Transportation Safety Board (NTSB) believe that about 80 percent of all serious and fatal rear-end collisions could be prevented with the use of collision avoidance systems in motor vehicles, a large majority of America’s automobiles do not have this kind of technology.

As such, drivers and passengers in Virginia continue to suffer serious injuries such as whiplash due to getting hit from behind.

In the majority of cases, according to The Washington Post, these auto accidents result from distracted driving. According to the newspaper, the National Highway Traffic Safety Administration (NHTSA) recently determined that around 87 percent of rear-end accidents “happened because the driver simply wasn’t paying attention to the road.”

Could Pure Contributory Negligence Be a Factor in Your Rear-End Crash?

Before you begin the process of filing a rear-end auto accident claim, it is important to understand a specific element of Virginia’s contributory negligence law.

Virginia is one of only a handful of states that has what is known as a pure contributory negligence rule. If you get hurt in an accident for which you are even minimally at fault, Virginia law prevents you from recovering anything.

For example, assume that you were involved in a rear-end auto accident, and you hit the car in front of you. However, numerous other factors could have caused the accident. For instance, maybe another large vehicle hit you from behind first, causing your vehicle to move many feet forward into another car. Or perhaps ice on the road contributed to the accident.

In a state that uses a comparative fault rule (instead of a pure contributory negligence rule), you might be considered to be one percent liable for the accident. Comparative fault states, unlike those with a pure contributory negligence scheme, apportion fault. Then, even if a plaintiff is deemed partially liable for an accident, his or her damages award will simply be reduced by the percentage amount for which a jury decides he or she is responsible.

Yet in Virginia, even being one percent liable for an accident means you could not recover anything. So, your fault could be a factor if you are in a rear-end crash.

If you are the driver in back, and an accident is caused even in part by your inattentiveness, it will be highly likely that you will be liable for the other driver’s vehicle damage and injuries, and you will be barred from recovering anything.

For example, because you were paying attention to your phone instead of the road, you may collide with the vehicle in front and held liable if you fail to see the vehicle coming to a stop or slowing down. Following too closely can, indeed, be a form of negligence.

However, in several scenarios, you may be able to recover under Virginia law. For example, let’s say you have come to a complete stop at a red light and have left sufficient space between your vehicle and the car in front of you. If another auto strikes you from behind and pushes your vehicle into the car in front of you, then you may not bear any responsibility for the accident.

Another scenario in which you could be able to recover damages would involve a defective auto product. For instance, if you are driving a car that has not yet been subject to a recall but has defective brakes (or another defect that prevents your brakes from working properly), the automaker may bear 100 percent of the responsibility for the crash.

So, if you hit a vehicle from behind because an auto defect prevented you from stopping, the car’s designer or manufacturer would most likely be held responsible for whiplash injuries or other harms that occur.

In some cases, road conditions such as icy highways and poor visibility may limit your liability for a rear-end auto accident. However, it may be difficult to prove that you do not bear any responsibility for such a crash.

Keep in mind: Even if you bear only a miniscule amount of responsibility for an accident, you may not be able to recover damages under Virginia’s negligence laws.

If you or someone you love suffered a severe head or neck injury in a rear-end auto accident, a lawyer can help with your case. At Marks & Harrison, we regularly handle a wide variety of auto accident claims from our offices located throughout Virginia. We can discuss your options with you today for seeking financial compensation for your losses. Contact us today to learn more in a free consultation.