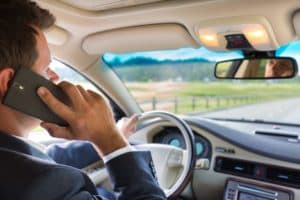 Many states have passed traffic laws banning drivers from using hand-held electronic devices. The goal of these laws is to prevent collisions and fatalities caused by distracted driving. As Drive Smart Virginia notes, nine people die and more than 1,000 suffer injuries in crashes which involve distracted driving.

In the last Virginia legislative session, lawmakers in both the House and Senate worked on reconciling a bill which would make using a hand-held device while driving illegal in the Commonwealth. However, the lawmakers failed to pass the bill before the legislature adjourned for the year. The reason: Some lawmakers were concerned that it would give police authorities too much power and potentially make some minorities vulnerable to profiling.

In 2019, members of the Virginia House and Senate are now looking to pass a new bill that is aimed at keeping drivers in our state focused less on their phones and more on the road.

Can You Use a Cell Phone While Driving in Virginia?

Virginia has seen an increase in traffic fatalities every year since 2013. Though accidents can happen for a variety of reasons, the impact that distracted driving has on at-risk populations like teenagers and young adults is undeniable. To address the issue of distracted driving, neighboring areas have passed laws banning the use of hand-held devices by drivers. In 2004 Washington, D.C. enacted a ban on drivers using hand-held devices and Maryland followed suit nearly a decade later in 2013.

Virginia has not enacted a law completely banning hand-held device use by drivers. However, each year the Virginia General Assembly has examined the issue and taken steps towards addressing it.  Over the years, the following laws have been enacted in our state:

While all of these steps have certainly given law enforcement some more latitude in enforcing distracted driving laws, they do not address the issue in the same way that a complete hand-held ban would.

Beyond legislation, many telecommunication companies have created social media campaigns to raise awareness about distracted driving. In addition to providing information about safe driving, these companies are encouraging people to make safe driving pledges. Also, many phones today feature built-in resources that cause drivers to go into “driving mode” when their car is in motion. This mode causes the phone to automatically respond to any incoming messages so that the driver is not notified or tempted to respond while driving.

New Virginia Bill Would Ban All Cell Phone Use While Driving

On the heels of failing to pass a more stringent bill at the end of 2018, Virginia lawmakers are hopeful that they can pass something in 2019. Delegate Chris Collins recently introduced House Bill 1811, which would directly address the use of hand-held devices while driving. Specifically, the bill would prohibit drivers from holding a “personal communications” device while driving. If passed, this bill would be a step forward from the current law, which merely prohibits reading and responding to texts or e-mails.

Under the current law, drivers in Virginia can technically hold a phone to their ear, browse websites and social media and use GPS and music streaming services without an app. All of these activities would be illegal under H.B. 1811, and drivers could face tickets and fines if engaged in those activities.

Get Help from Our Virginia Distracted Driving Accident Lawyers

Using a smartphone while driving can have devastating consequences. If you or someone you love has been hurt due to a distracted driver in Virginia, turn to a law firm with more than a century of experience with helping people in our state to pursue justice and fair compensation.

As one of the largest personal injury firms in the state, Marks & Harris on has the attorneys, support staff and resources necessary to handle any injury case, large or small. If you have been severely injured in a car accident due to someone else’s negligence, let us put our experience to work for you. Schedule a free, no-obligation consultation with our team by calling or reaching us online today.

Ryan Walker
Ryan T. Walker joined Marks & Harrison in 2014 after working for GEICO on the defense side of personal injury cases. A graduate of Virginia Military Institute and the Florida State University College of Law, Ryan has practiced exclusively in the area of civil litigation throughout his legal career, with an emphasis on personal injury law. He has vast experience in automobile accident litigation. In addition to being licensed to practice in all of Virginia's state courts, Ryan is admitted to practice in the U.S. District Courts for the Eastern and Western Districts of Virginia.
Richmond