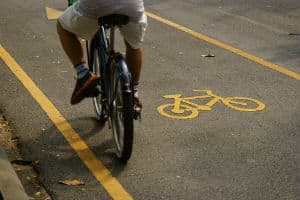 With the World Road Cycling Championships coming to Richmond in September, and more than 1,000 cyclists expected to converge on our city, we thought we would take this opportunity to discuss bicycle safety, as well as new and existing Virginia bike laws.

In July, new laws went into effect, including a few which involve bicyclists and their safety. These new bike laws will hopefully make Richmond a more bike-friendly city — and keep it that way long after the 2015 World Road Cycling Championships are over.

It was just a little over a year ago that Virginia enacted a new bike law requiring drivers to keep at least three feet of space between their vehicle and any bicyclists when passing. While the law did result in at least 12 drivers being ticketed for their alleged reckless endangerment of bicyclists, the Vienna Patch has raised the question of whether this law has had a significant impact on bicyclist safety. Even if it hasn’t had much of an impact on reducing the number of car accidents involving bicyclists, it is hoped that there will be a significant drop in bicycle accidents as a result of the law’s passage.

Among new laws that went into effect on July 1, these two pertain to bicyclists, as drivers now:

Other Bike Laws in Virginia

Over the years, Virginia has implemented a number of laws designed to keep bicyclists safe and lower the risk of injury or death in bicycle-involved accidents. Some of the existing laws cover:

Steps Drivers Can Take to Reduce the Risk of Bicycle Accidents

The Virginia Department of Motor Vehicles has launched a bicycle safety campaign to encourage both drivers and bicyclists to act responsibly and do everything possible to reduce the risk of bicycle accidents. As part of this campaign, bicyclists are advised to always ride with the flow of traffic, stop and look both ways for oncoming vehicles, use turn signals, ride defensively and follow the rules of the road.

Drivers can lower their chances of being involved in or causing a bicycle accident by:

As long as motorists understand that bicyclists are here to stay, and they are willing to share the road, actions can be taken to minimize the risk of a bicycle accident. Virginia’s new laws are another step closer to making Richmond a bicycle-friendly place in which to live, for both adults and children.