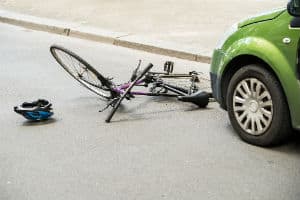 Bicyclists are one of the most at-risk groups for serious injuries in car accidents. Fortunately, new technology promises to play important role in substantially lowering the risk of injury to bicyclists. A new smartphone app may be a key factor in preventing bicycle accidents.

According to ABC 7 News, the app is called “BikeShield” and can be downloaded at no cost to drivers or bicyclists. The more people who install the app, the less chance there is of a bicyclist being inadvertently hit or killed, as long as both parties are carrying cellphones. It is crash avoidance technology geared towards the bicyclist, motorcyclist and other at-risk riders.

The way it functions is quite remarkable. The app sends out a constant acoustic signal to surrounding vehicles alerting drivers to an approaching bicyclist, even before the bicyclist arrives in the driver’s line-of-sight. Bus drivers can also use BikeShield’s “Bike-to-Bus Communication System” to minimize the risk of a collision, and cities are being encouraged to include the use of this technology in their bike-sharing programs. Maybe in the future we’ll see this app and other similar technologies installed as a basic feature in newly manufactured vehicles.

What makes this particular app so innovative is its potential ability to reduce or eliminate senseless collisions between bicyclists and motor vehicles.  There are far too many of those accidents.

The Insurance Institute for Highway Safety (IIHS) reports that 741 people lost their lives in bicycle-involved accidents in 2013, with 84 percent being under the age of 21. We believe technology to protect those vulnerable riders is long overdue.

While many actions can be taken to reduce the risk of injury while riding a bicycle, helmets have long been proven effective, but are not foolproof. In 2013, 127 of the 741 bicyclists killed were wearing helmets at the time of the collision. Factors such as time of day and type of road can also have an impact on the number of bicycle accidents. It is hoped that with the use of this innovative app, riding your bicycle at dusk or during evening hours, along urban streets or through intersections could be less likely to result in injuries or death.

Other Actions You Can Take to Avoid Bicycle Accidents

In addition to using the BikeShield app and ensuring you wear a properly-fitted helmet while riding a bicycle, both bicyclists and drivers can take other actions to avoid being involved in a bicycle accidents, including the following:

Drivers can minimize their risk of being involved in a serious or fatal bicycle accident by:

Taking these simple steps can help reduce the risk that you or someone you love will be injured or killed in a bicycle accident, or that you, as a driver, are responsible for harming or fatally injuring a bicyclist.