Should I Agree to Arbitration to Resolve My Personal Injury Case 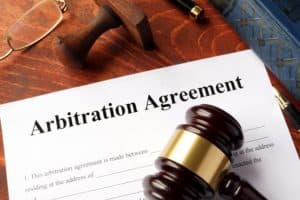 Arbitration is increasingly playing a role in personal injury claims in Virginia and in many other parts of the country. It is a type of “alternative dispute resolution.” In other words, it is an alternative to taking a case to trial.

Arbitration may provide some benefits. For instance, if a case goes through arbitration, it will likely be resolved faster than it would be resolved if it went through extended settlement negotiations or through a trial. However, arbitration can also have drawbacks. In particular, your fate will rest in the hands of a single person – the arbitrator – and not a jury of peers.

Historically, all parties to a personal injury claim would need to first agree to enter into arbitration. However, today, many contracts feature an “arbitration clause.” The clause requires disputes to be resolved through arbitration – it’s not a choice. For instance, nursing home contracts often require residents and their families to through arbitration, which can make it difficult to pursue a nursing home abuse or neglect claim in court.

Depending on the circumstances of your case, you may want to agree to arbitration, or you may protect your rights and serve your interests better by declining an offer to participate in the process. You should refrain from making any decision until you have reviewed your case with an experienced personal injury lawyer.

Arbitration is a private dispute resolution process. During arbitration, a neutral party hears both sides of a dispute and renders a decision that resolves it. The arbitrator typically is a retired judge or attorney or someone with similar decision-making experience. The arbitrator receives a fee. Both parties in the dispute may split the fee, or the “loser” may be forced to pay it.

The grounds for appealing a decision from binding arbitration typically are limited. A party usually must show that a newly discovered conflict of interest existed or that some other serious wrongdoing occurred.

Arbitration is not the same as mediation. In mediation, a neutral mediator does not issue a decision. Instead, the mediator guides the opposing parties towards a mutually satisfying agreement that resolves their dispute.

What Are the Advantages of Arbitration?

The parties in arbitration can agree to limit the potential award the arbitrator makes. Such “high-low” agreements set minimums and maximums for damages without the arbitrator’s knowledge. This provides an injured party with the assurance that he or she will receive payment if the arbitrator returns a decision in the party’s favor. For the other party (or rather, the party’s insurance company), the agreement assures that there will be a limit to its costs if their insured is found liable.

What Are the Disadvantages of Arbitration?

The chief drawback to arbitration is that it limits one’s ability to appeal an arbitrator’s decision. For instance, in binding arbitration, it can be difficult to pursue an appeal unless some obvious ethical transgression occurred, or the arbitrator’s decision was illegal or violated public policy. If you are unsatisfied with a decision in non-binding arbitration, your only recourse may be to go back to trial preparations or resume negotiations with the opposing party.

Another disadvantage is the lack of “automatic discovery.” This is a requirement for each side to share its evidence before a trial begins. So, in arbitration, you could face a disadvantage without knowing it until the arbitration proceeding is underway.

Finally, many people believe that it is much better to present a case before a jury of their peers rather than a single arbitrator. Indeed, for this reason, many critics insist that arbitration has no place in the personal injury claims process.

What Is an Arbitration Clause?

An arbitration clause is a statement typically found in the so-called “fine print” of a contract. It requires anyone who signs the contract to enter into binding arbitration of any disputes “arising under or related to” the contract instead of bringing lawsuit.

Many companies that provide consumer products and services include arbitration clauses in their contracts. A 2015 report to Congress said that 15 of the 20 largest banks that issue credit cards, and seven of the eight largest cell phone service providers used arbitration clauses.

The company almost exclusively enjoys the advantages that “forced arbitration” offers. Some companies guide the unsuspecting consumer toward an arbitrator who is friendly to the company. As a result, they may not receive the same fair treatment that they would expect to find if they presented their case before an impartial judge and jury.

It is not unusual for consumers to enter into agreements that require arbitration without even realizing it or giving the matter much thought. Under Virginia law those contracts are considered to be “valid, enforceable and irrevocable.” However, depending on the contract or certain acts, omissions, or conduct by the opposing party, there may be options available for seeking a court order to “stay,” or put off, the arbitration and let a civil claim proceed to court.

If you are pursuing a personal injury claim, arbitration may or may not serve your best interests. For this reason, you should always consult with an experienced personal injury lawyer before you agree to enter arbitration, or if you believe that a contract you signed requires arbitration.

Get in touch with Marks & Harrison today. We have a long record of representing clients in Richmond and throughout Virginia in cases that involve arbitration. We will review your case in a free consultation and discuss all legal option that are available to you. If you have suffered serious injuries through no fault of your own, our goal will be to maximize the amount of compensation that you recover.