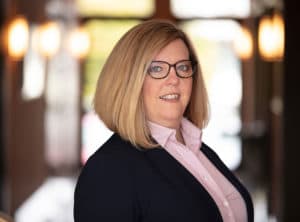 Marks & Harrison is pleased to announce that attorney Joanna L. Suyes was appointed by the Supreme Court of Virginia to an at-large seat on Bar Council for a three-year-term.

The Virginia State Bar is governed by its Council and Executive Committee, whose members are elected or appointed from every judicial circuit in the Commonwealth. Council is an 81-person body, consisting of 65 lawyers elected from the 31 circuits throughout the Commonwealth, as well as nine at-large members appointed by the Supreme Court of Virginia, four conference chairs, and three officers.

Learn more about the Virginia State Bar and Bar Council.