What Is the Police Officer Role in a Car Accident Case in Virginia? 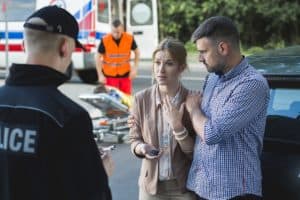 Let’s say that you get into a car accident. After you get out of the car and check for injuries and vehicle damage, the other driver may try to convince you that you don’t need to call the police. The driver may offer to write you a check or give you cash at the scene, or the driver may simply ask to exchange phone numbers and contact information and agree to pay you later on for any losses you have suffered. Don’t listen to this. The reality is that you should call the police as soon as possible.

Virginia law actually requires you to call the police after any car accident that involves death, injury or property damage. So, after most crashes, the drivers involved in the crash have a legal duty to call 911 and get police to the scene.

Ultimately, you will benefit in many ways from calling the police. Here, we provide an overview of those benefits. To learn more and to discuss the specific facts of your car accident, make sure to contact Marks & Harrison. As one of Virginia’s oldest and largest personal injury law firms, we will have the experience and resources to protect your rights and pursue all compensation you are due from your car accident claim.

After you call the police, an officer will come out and secure the scene. In other words, the officer will instruct individuals to move their vehicles over to a safe area that is out of the way of traffic, if possible. The officer will also try to direct traffic away from the scene of the accident by setting up cones and flares or by using hand signals to direct traffic. This will be important for your safety.

If there are injuries, or the officer suspects that someone was injured in the crash, the officer can also call for EMTs. This will allow you and others to get the medical help that you need immediately following the accident. After any accident it’s important to seek medical help, as it can provide proof of your claim later on.

An Officer Can Investigate What Happened in the Accident

After the scene has been secured, and all individuals have received medical attention that require it, the officer will begin an investigation. The investigation will focus on determining who was involved in the crash, what happened, where it happened and how the crash occurred (or the cause of it).

As part of the investigation, the police officer will take a number of factors into consideration, including:

The officer also will speak to all parties involved in the accident. A police officer will also try to locate individuals nearby that may have witnessed the crash and gather their statements about what happened.

It is likely that the police officer will also take pictures of the scene. The officer will pay particular attention to the condition of the vehicles and any property damage which they sustained. These photos will document any damage and play a role in determining the cause of the crash. Pictures really are worth a thousand words. If you are too injured to take your own photos at the crash scene, you will benefit greatly from being able to access the officer’s photos.

The Officer May Issue Traffic Citations

When a car accident occurs, someone is usually at fault. A police officer will complete all of the above steps in an attempt to establish that fault. When a person’s negligence has contributed to or directly caused an accident, it’s typically due to the fact that the person broke the law. Perhaps they were driving while distracted, or maybe they were traveling at excessive speeds. Once an officer determines which law was violated, the officer will issue a traffic citation.

The Police Officer Will Prepare a Crash Report

After a police officer has all the information that he or she needs, the officer will prepare an accident report. The report will include all the basic information about the accident. It will state who was involved in it, the date and the location of the crash and the vehicles involved in it. It will also include the names and statements of any witnesses, and it will list all injuries that people suffered. Most importantly, the crash report will provide a preliminary indication of who was at fault.

The Officer Can Give a Deposition and/or Testify in Court

Our Virginia Car Accident Lawyers Are Ready to Help You

If you are in a car accident in Virginia, you should speak to a car accident lawyer right away. The lawyer can help you to order and review a copy of the police report, conduct an independent investigation of your crash and evaluate your case. Ultimately, the lawyer can help you to pursue all compensation that you are due. To learn more about what a lawyer can do for you, contact us today at Marks & Harrison. We have offices in Richmond and nine other locations throughout Virginia. We can provide a free consultation and immediately go to work for you.