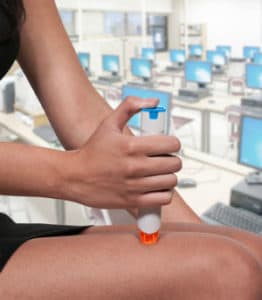 The U.S. Food and Drug Administration (FDA) recently sent a warning letter to the company that makes Mylan’s EpiPen emergency allergy treatment products. In the letter, the FDA accuses the company of failing to fully investigate “serious and life-threatening” EpiPen failures or to take “appropriate corrective actions.”

The FDA delivered the letter on September 5, 2017, to Meridian Medical Technologies. Meridian is a Pfizer subsidiary that makes EpiPen and EpiPen Jr. at its facility in Brentwood, Missouri. Mylan has owned the rights to EpiPen products since 2007.  (The company has sparked widespread criticism for massively boosting the price of EpiPens.)

“Auto-injector” EpiPens provide epinephrine shots to patients who are suffering serious, potentially life-threatening allergic reactions such as anaphylaxis. However, as the FDA notes, if an EpiPen fails to operate as expected or to deliver the intended dose of epinephrine, “patients can die or suffer serious illness.”

According to the FDA, Meridian has received “hundreds of complaints that [its] EpiPen products failed to operate during life-threatening emergencies, including some situations in which patients subsequently died.”

The FDA reports that many of those complaints alleged that the EpiPens:

“You did not thoroughly investigate those complaints,” the FDA states in the letter. “Moreover, we note that your follow up did not include removing potentially defective products from the marketplace[.]”

The FDA writes in the letter that Meridian actually investigated only a small number of the 171 complaint samples that it received between 2014 and 2017.

For example, in April 2016, Meridian received a customer complaint about an EpiPen that failed to activate, according to the FDA. The company investigated the product and determined that the “root cause” of the device failure was a flawed component – a manufacturing defect that Meridian previously detected in February 2016.

Even though Meridian did not expand its investigation, the company concluded in June 2016 that the defect was “infrequent” and that it would take “no market action,” meaning that potentially defective EpiPens remained on the market.

In March and February 2017, the FDA inspected the Meridian facility in Missouri. At that time, the FDA urged the company to reopen its investigation. According to the FDA, it was only after the agency’s inspections and “multiple discussions” with Meridian that company voluntarily recalled 13 EpiPen lots in March 2017.

The FDA said that its 2017 inspections uncovered “significant violations” of FDA requirements, according to the warning letter. The FDA notes that it found similar violations when it inspected the facility in October and November 2014.

“These repeated failures demonstrate that your facility’s oversight and control over the manufacture of these products is inadequate,” the FDA states.

The FDA warned Meridian to “promptly correct” the violations cited in the letter. If the company fails to make those corrections, the FDA could take legal action, including seizure and injunction, according to the warning letter.

Companies Give Statements in Response to FDA Warning Letter

Both Pfizer and Mylan gave statements to The New York Times in response to the FDA’s letter, stating they believed “in the safety and efficacy of EpiPen products.”

A Pfizer spokeswoman told CNBC that it was “not unusual to receive product complaints, especially when the product is frequently administered by non-medically trained individuals.” Additionally, the spokeswoman said that the company had “no information to indicate that there was any causal connection between these product complaints and patient deaths.” A Pfizer spokeswoman told CNBC that the company would continue to “work with FDA” to resolve issues that the agency raised in the warning letter.

Are You Concerned About EpiPen Failures?

As attorneys who protect the rights of patients who have been harmed by dangerous drugs and defective medical devices, Marks & Harrison will continue to closely monitor this situation and its impact on patients in Virginia and throughout the country. If you believe that you suffered serious illness or lost a loved one due to an EpiPen failure, please contact us today. We can provide a free review of your case and discuss all legal options that may be available to you.