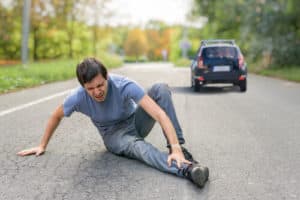 Virginia law prohibits drivers from fleeing the scene of an auto accident. Still, hit-and-run accidents frequently happen in our state. In fact, the Virginia Department of Motor Vehicles (DMV) reports that more than 4,500 hit-and-run crashes occurred in Virginia in 2017 alone. In many cases, the victims of these accidents are pedestrians and bicyclists.

If you recently were hurt in a hit-and-run car accident in Virginia, you owe it to yourself to get immediate help from an experienced lawyer. At Marks & Harrison, we offer our clients the experience and resources that come from being one of Virginia’s oldest and largest personal injury law firms, including our rapid-response investigative team. This team can begin an immediate investigation of your case, which can help tremendously if your crash involves a hit-and-run driver. To learn more, contact Marks & Harrison today and receive a free consultation.

Why Do Drivers Leave the Scene of Accidents in Virginia?

Many drivers who flee the scene of an accident in Virginia are eventually caught by police. In many cases, it turns out that they did not stay to check on their victims or talk to police because they lacked liability auto insurance. Virginia has a relatively high rate of uninsured drivers on its roads – 9.9 percent – according to the Insurance Information Institute.

State law may contribute to this high rate of uninsured drivers. The law allows drivers to be on the road so long as they pay a $500 uninsured motorist fee. This fee allows a driver to register his or her car. However, it does not cover the damage that a driver causes in a crash. So, a driver without insurance may flee a crash due to financial reasons.

Some of the other reasons why drivers may leave the scene of an auto accident are:

The reason why a driver left the scene of your crash could carry important implications as you move forward and seek compensation for your property damage, medical bills, lost income, pain, suffering, emotional distress and other harm. This is especially true if the reason was a lack of insurance.

Your Legal Options After a Hit-and-Run Crash in Virginia

In a sense, a hit-and-run accident is like any other car accident case. To recover damages, you must establish that another driver was negligent. You must also show that this negligence caused you to suffer your injuries. Unlike many other states, which have converted to a comparative negligence system, Virginia continues to operate as a pure contributory negligence state. In other words, if you are found to have contributed to your accident in any way, you may be unable to recover any damages.

The primary difference between a hit-and-run crash and other types of auto accidents lies in how you collect compensation. Here are two possible scenarios:

In accordance with Virginia law, vehicle drivers must either pay a $500 uninsured motorist fee or comply with insurance requirements. Drivers who opt for the insurance option must carry at least these minimum amounts:

Unfortunately, simply identifying the driver is not enough to guarantee a recovery. As mentioned above, it could be that the driver left the scene because he or she lacked liability insurance. Fortunately, the state of Virginia requires all insurance providers to include uninsured motorist (UM) protection as a part of a liability policy. Absent a written and signed waiver, if you are insured in Virginia, you should have a UM policy that equals the limits of your liability coverage.

Additionally, if the driver lacks enough insurance to cover all your damages, then you may be eligible to file an underinsured motorist (UIM) claim. It will depend on whether you carry this type of coverage. If you do have UIM, it will cover the difference between your total damages and what the driver’s insurance covers (up to the limits of your UIM policy).

The hit-and-run driver is never identified – In this instance, your only real option for a financial recovery would be through your own UM policy. You would file what is commonly called a “John Doe” claim.  You would serve the claim on your own insurance carrier. However, if an insured person’s injuries and other damages resulted from a no-contact incident—meaning that the “John Doe” vehicle did not come into contact with the insured vehicle, or if the insured was not occupying the motor vehicle at the time of the accident—the insured must report the incident immediately to either the insurer or law enforcement. If the insured fails to do so, he or she may unwittingly forfeit his or her rights to recover compensation.

It is important to note that you may also be able to file a UM or UIM claim through your own insurance policy even if a hit-and-run driver injured you when you were biking or walking.

What Should You Do After a Hit-and-Run Crash in Virginia?

If you are involved in a crash with a driver who flees the scene, you can take certain steps to protect your ability to recover compensation. The steps you take can help police to eventually catch the driver, and they can help to establish your claim for damages. Those steps include:

How Can Our Lawyers Help with Your Virginia Hit-and-Run Accident Claim?

Whether you were in a car, on foot or on a bike when the negligent driver hit you, you have likely suffered severe trauma and injuries due to the incident. Do not let the fact that the driver fled the scene deter you from exercising your rights. A skilled Virginia hit-and-run attorney can help you to explore all your legal options, identify all possible sources of compensation and fight for your rights to a full and fair monetary recovery. When you contact us at Mark & Harrison, you can count on us to guide you through every step of the claims process and aggressively pursue all compensation that you are due.

We offer our clients the experience and resources that come from being one of Virginia’s oldest and largest personal injury law firms. We also work on a contingency fee basis, which means that we will not get paid unless you do. Call us or contact us online today to learn more in a free consultation through our office in Richmond or through one of our nine other offices located throughout Virginia.