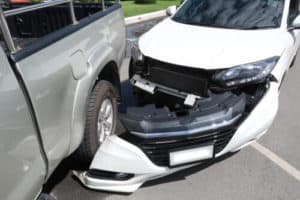 Tailgating, or following too closely behind another vehicle, is extremely dangerous driving behavior, and even more dangerous at high speed. Most drivers know from experience that on congested highways and in bumper-to-bumper city traffic, vehicles ahead can stop or slow down suddenly, and without warning. The less distance drivers have between vehicles, the less ability to stop in time to avoid a collision.

According to a human factors study conducted by the Department of Mechanical, Industrial, and Systems Engineering of the University of Rhode Island, rear-end collisions ranked highest among 5.9 million average annual police reported traffic accidents in the U.S. from 2006 to 2008, accounting for more than 1.8 million accidents, 2,200 fatalities, and half a million injuries every year. The study reports that the two major contributing factors to rear-end collisions are driver inattention and tailgating, with the latter being the most significant contributing factor.

How Close is Following Too Closely?

The University of Rhode Island study recommends the “Two Second Rule” to avoid rear-end collisions. Drivers are advised to maintain at least two seconds of headway between their vehicles and the vehicles ahead of them. Anything less is considered tailgating. The more distance a driver allows between his or her vehicle and the vehicle ahead, the more time there is to recognize and react safely to hazards.

A Driving and Tailgating Fact Sheet published by the government of Texas states that the distance necessary for stopping is directly proportional to the weight of the vehicle. A fully-loaded, 80,000-pound 18-wheeler, for example, will have a much longer stopping distance than a 3,000-pound passenger vehicle. According to the fact sheet, it takes nearly twice as long for a heavy truck to stop as it does a passenger vehicle.

The fact sheet advises drivers to defend themselves against rear-end collisions by creating a two-second safety cushion to allow enough time to perceive and react to a roadway hazard and avoid a crash. However, when driving at night, in hazardous weather conditions, through road construction, or in heavy traffic, the fact sheet recommends that drivers double the safety cushion to four seconds. It stands to reason that drivers of heavier vehicles such as large commercial trucks should maintain even more distance from the vehicle ahead.

Legal Help for Victims of Accidents Caused by Tailgating

Our seasoned Richmond car accident lawyers believe that negligent drivers should be held accountable and that accident victims deserve full compensation for their injuries. We understand that insurance companies are interested in protecting their own bottom line and minimizing the amount paid out in claims. As a long-established firm with a practice focused on personal injury cases and other injury matters, we know how to deal with insurance companies and how to build a solid case for the maximum compensation you are entitled to receive. Contact us today for an ethical and dedicated legal team on your side.