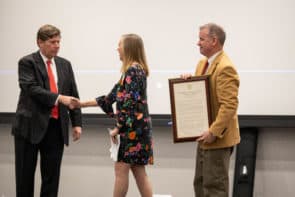 The Hopewell/Prince George Chamber of Commerce hosted a program at John Tyler Community College’s William H. Talley Workforce Center for the purpose of celebrating the Chamber’s 100th Anniversary and honoring current members that were around when the Chamber was founded.

Marks & Harrison founder David A. Harrison, Jr. authored the Chamber’s original Articles of Incorporation and By-Laws. Harrison’s grandson, James G. Harrison III, current President of the Firm, grew up in Hopewell and now resides in Prince George County. His grandfather passed down to the family his intent for the Chamber to be a non-political organization whose purpose would be to serve business. Harrison shared his grandfather’s many contributions to the area, presented the chamber with a replica of a resolution given to the elder Harrison by the General Assembly upon his retirement in 1966 and then concluded with “we are a proud member of the Hopewell/Prince George Chamber of Commerce.”