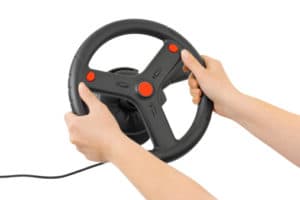 We have to applaud carmaker Toyota for its use of virtual reality to teach teenagers about the dangers of distracted driving, a leading cause of car accidents.

“Drivers” seated in the simulator are tasked with navigating traffic while dealing with such distractions as other drivers, passengers, the radio and text messages, ABC’s “Good Morning America” says. Drivers who allow themselves to become distracted “experience the consequences of distracted driving within the virtual setting.”

According to the report, a marketing director for Toyota said the experience “mirrors real life behind the wheel, giving us a powerful, one-of-a-kind way to show parents and teens how everyday distractions can affect their ability to drive safely.”

Drive Smart Virginia, a non-profit organization founded by several auto insurance companies, says 8 out of 10 traffic crashes in Virginia are related to a distracted driving incident. This is despite the fact that Virginia law makes it illegal to send or read text messages while driving, and for novice (young) drivers to use a cell phone while behind the wheel.

“Texting and driving, or checking out Facebook or Twitter on your smartphone, is the most dangerous thing you can do when you drive,” the organization says.

The National Highway Traffic Safety Administration, which runs the Distraction.gov website, says 10 percent of drivers under the age of 20 who were involved in fatal crashes in a recent year were reported as distracted at the time of the crash. The under-20 age group had the largest proportion of drivers who were distracted.

Toyota is taking its distracted driving simulator to car shows across the country, so maybe it will do some good among teens interested in car shows.

Toyota’s schedule for the simulator does not currently include the Virginia Motor Trend International Auto Show at the Greater Richmond Convention Center March 20 to 22 as of this writing, but as plans for these shows change frequently, it may be worthwhile to check the schedule again at a date closer to the Richmond expo.