The Rule of Seconds: A Safe Following Distance on the Highway 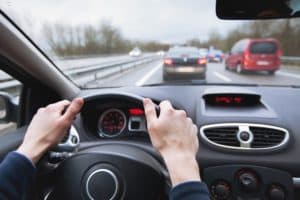 Following too closely behind another vehicle, or tailgating, is one of the most common causes of car accidents in Virginia and across the country. Rear-end accidents often lead to serious injuries, including whiplash, even when they occur at slow speed. For this reason, drivers should always keep a safe distance between their cars and the vehicles ahead of them in traffic.

As driver, you may wonder what constitutes a “safe distance.” One place to look for an answer is Va. Code § 46.2-816. The statute prohibits drivers from following another vehicle “more closely than is reasonable and prudent, having due regard to the speed of both vehicles and the traffic on, and conditions of, the highway at the time.” The term, “reasonable and prudent” is a vague one and subject to debate. However, the statute clearly indicates that speed, traffic and road conditions are factors that a driver should consider.

How to Measure a Safe Following Distance

Many drivers follow the “three-second rule.” In other words, you should keep three seconds worth of space between your car and the car in front of you in order to maintain a safe following distance.

Many other organizations promote the three-second rule, including:

According to the Virginia Department of Motor Vehicles (DMV), drivers should actually leave a distance between two-to-four seconds behind the car in front, depending on their speed. For instance, if you are traveling at a speed of less than 35 mph, you should be safe with a two-second cushion. If your speed increases to 35-to-45 mph, a three-second following distance should be safe, while a four-second distance would apply if you were going 46 to 70 mph.

To measure your distance, the DMV suggests that you glance at the car ahead of you as it passes a fixed object like a sign, fence, corner or overpass.  Then, you should count the seconds it takes you to pass the same object. Using the basic “one-one thousand” counting method should work.

If you reach the mark before you have counted off two, three or four seconds – again, depending on your speed – then you are following too closely. You should slow down and increase your following distance.

Three Seconds May Not Be Enough

“The added weight of the trailer requires a longer stopping distance for your vehicle,” the NSC says.

Stopping distance is a key to what constitutes a safe following distance. Heavier vehicles require more time and space to stop. The opposite applies, as well. Lighter vehicles stop more quickly. So, if you are following a motorcycle or smaller car, you should leave more space in case the vehicle suddenly comes to a halt or quickly reduces speed in order to drive around an object in the road.

Stopping Distance and a Tractor-Trailer in the Rearview Mirror

The longer stopping distance required by a larger vehicle is of concern when the vehicle is behind you, barreling down the road and too close for comfort. When you cannot change lanes to get out of the path of an 18-wheeler, bus, RV or other large vehicle, you should use the three-second rule and speed up to set a safe space.

Remember: The space between your vehicle and a large vehicle behind you on a highway should be four seconds at speeds of 46-70 mph, plus one second for every 10 feet of vehicle length. In Virginia, the maximum length allowed for tractor-trailers is 65 feet in total. So, the safe distance between a passenger vehicle and the largest commercial trucks on the highway is roughly 10 or 11 seconds. The safety cushion needed for an RV, bus or smaller truck behind you may be shorter, but a 10-second gap would not hurt.

Hit by a Tailgating Driver? Our Virginia Car Accident Lawyers Can Help You

Accidents happen when truckers or other drivers are in a hurry and speed, or when they drive while distracted, fatigued or otherwise careless and reckless. Their negligence can cause them to follow too closely and cause a rear-end collision. If you believe that you or a loved one was hurt in a crash because a driver failed to leave a safe following distance, you should seek help from an experienced car accident attorney with delay. Contact Marks & Harrison today through one of our 10 offices located throughout Virginia and receive a free consultation about your case.

Westwood Smithers III
J. Westwood Smithers III works in Marks & Harrison's Chesterfield and Hopewell offices, focusing his practice on the representation of personal injury victims and their families. He earned his undergraduate degree from Randolph-Macon College and his law degree from the University of Richmond School of Law. West is a member of the American Association for Justice, Virginia Trial Lawyers Association and Richmond Bar Association.
Richmond