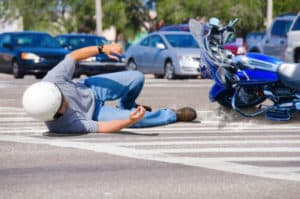 The incidence of motorcycle accidents is falling in Virginia, according to data from the Virginia Highway Safety Office.

According to Commonwealth figures, the number has for the most part been on the decline here for the last three years. The Highway Safety Office’s annual reports from 2011 to 2013, the latest available, show:

One of the best ways for motorcyclists to protect themselves is to wear a DOT standards-compliant helmet. Virginia is one of 19 states and the District of Columbia that required all motorcyclists to wear helmets as of January 2015. Virginia’s universal motorcycle helmet law was adopted in 1970.

The Virginia Department of Motor Vehicles says a rider without a helmet is 40 percent more likely to suffer a fatal head injury than is a helmeted rider. Helmets are:

The NHTSA says of motorcyclists in Virginia involved in fatal accidents (not necessarily in which the biker was killed):

Alcohol Use and Motorcycle Crashes

The impairment caused by alcohol and its effect on a drivers’ and motorcyclists’ capabilities are well known. In Virginia, according to state statistics, relatively few motorcyclists involved in crashes are found to have been drinking.

VA Motorcyclists in Crashes who were:

Nationally, year after year, more than a quarter or motorcycle riders in fatal crashes have a blood-alcohol concentration (BAC) of .08 percent or more (the level of legal impairment), the NHTSA says.

BAC of 0.08 or more among motorcyclists in fatal crashes:

Statistics can be tricky, as we all know. The numbers show that motorcyclists in Virginia are safer than motorcyclists counted nationwide. But if you or a loved one of yours is injured in a motorcycle accident, that is the one accident that matters most to you.

Since motorcycle accidents can happen to anyone, motorcyclists should consider taking a motorcycle safety course.  In Richmond, you can find motorcycle safety classes, as well as general rider classes, that take place behind the Richmond Harley-Davidson at the Marks & Harrison Pavillion.  To find out more information about classes and schedules, you can contact the Motorcycle Safety Center of Virginia here.”

If you have suffered injuries or other losses in a motorcycle accident in Virginia that was not your fault, talk to a Marks & Harrison motorcycle accident attorney about your case. We can help you seek justice and potentially obtain compensation for your medical bills, lost income, property damage and more.