Distracted Driving Still A Huge Problem in Virginia Despite Laws 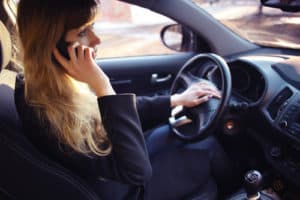 After years of public awareness campaigns and the adoption of new laws, distracted driving remains a deadly threat on highways in Virginia and across the country.

As Virginia and our country commemorate Distracted Driving Awareness Month during April, we look at the state of the fight against this reckless driving behavior and are dismayed.

The U.S. Department of Transportation says that since 2009 it has held two national distracted driving summits, banned texting and cell phone use by commercial drivers (i.e., truckers and bus drivers), encouraged states to adopt tough laws, and launched several campaigns to raise public awareness about the issue.

Today, Drive Smart Virginia says 8 out of 10 traffic crashes in Virginia are related to a distracted driving incident. Ashland County, Va., just north of Richmond, says an average of nine people die every day in traffic crashes caused by driver distraction, usually “a distraction from technology.”

Gov. Terry McAuliffe’s office, in his Distracted Driving Month proclamation quotes Centers for Disease Control and Prevention statistics that say 69 percent of U.S. drivers ages 18 to 64 say they have talked on their cell phone while driving and 31 percent say they have read or sent email or text messages while driving.

A study of teenagers and distracted driving published last month had some startling findings about teens’ behavior, including:

Virginia is one of several states that have adopted laws to curb texting while driving. In 2013, during the first six months of Virginia’s texting ban, the state won 725 convictions for violations of the law, according to Fox 5 D.C.

But law enforcement officials say it’s hard to enforce the law. The Washington Post called the VA law “all but toothless” because drivers can still hold phones to make phone calls and get directions from a smartphone’s GPS app. As the Post says, “Any driver eager to avoid the fine and willing to dodge the truth can say he had the device in hand for a legal purpose.”

The Virginal law also requires police to see that a driver has a phone or similar device in their hand in order to ticket them. Because this is difficult for an officer who is also driving, Virginia State Police began an initiative last fall to put two troopers in an unmarked car so one can watch for distracted drivers as the other drives.

“When a spotter catches a distracted driver, the trooper not behind the wheel will watch to make sure they’re right and try to take a picture,” says WDBJ Television in Roanoke. “If it’s confirmed the person was texting, they’ll activate the lights and pull the driver over.”

In the first 12 hours of the undercover campaign, troopers issued 12 tickets for texting behind the wheel among more than 20 other violations.

Do Your Part About Distracted Driving in Virginia

Don’t wait for the police or an ambulance attendant to tell you about distracted driving. April is a great time to take the Distracted Driving Pledge and then to put the phone down and drive.

A quick look away from the road to find and answer your phone or to write a “quick” text could cause a serious car accident. It could injure or kill you, your passengers, or someone in another car. At Marks & Harrison, we help Virginia residents who have been injured in car accidents, and we pursue many distracted driving cases based on accidents that did not have to happen.

Let’s get serious about distracted driving in Virginia. Let’s put an end to this recklessness and the tragedies it causes.