What Are the Most Common Causes of Large Truck Accidents? 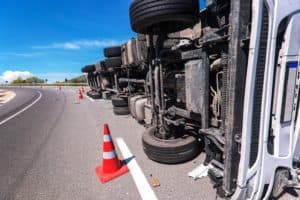 A truck driver may end up crashing a tractor-trailer or other large commercial truck for a number of different reasons. Driver error, vehicle failure or road conditions, for instance, often contribute to truck crashes. In many situations, a combination of factors causes the accident.

The Richmond truck accident lawyers at Marks & Harrison investigate truck accidents all across Virginia. We determine the causes of truck accidents in order to determine whether individuals injured in them deserve to be compensated by truck drivers, trucking companies and/or third parties.

Based on the cases we have investigated,  Virginia Department of Transportation (VDOT) statistics, federal research and more, we have assembled the top causes of truck accidents below.

Most truck accidents are caused by truck driver error, such as the following:

The above accident causes typically follow bad decisions by drivers. Some examples are:

Many truck accidents are caused by the failure of the vehicle. In most cases, the failure traces to defective parts. Examples include:

Because of the multiple potential causes of a truck accident, a thorough independent investigation is required to determine what happened and who should be held responsible for it. The Virginia truck accident attorneys of Marks & Harrison can establish responsibility for truck accident that injured you or caused the loss of a loved one, and we can pursue all compensation you are due.

Please contact Marks & Harrison as soon as possible so we can start investigating your case today. Contact us and receive a free consultation through our office in Richmond, at one of our nine other offices located across Virginia, or at another location that is convenient for you.

Bryan L. Meadows
Bryan L. Meadows is the Managing Attorney of Marks & Harrison's Fredericksburg office, where he concentrates his practice in the area of personal injury law. A graduate of Christopher Newport University and the Penn State University School of Law, Bryan served as the Managing Attorney of GEICO's Staff Counsel in Roanoke prior to joining Marks & Harrison. He is licensed to practice in Virginia state courts and the U.S. District Courts for the Eastern and Western Districts of Virginia. Additionally, Bryan has served as Treasurer on the Board of Directors for the Brain Injury Association of Virginia and as President of the Salem/Roanoke County Bar Association.
Richmond