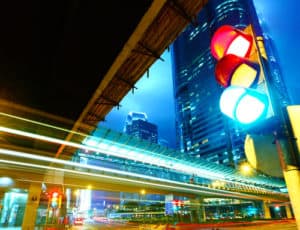 Traffic signals are there for a very good reason. Without them, motoring would be chaos on today’s congested roadways and many more traffic accidents would occur. Drivers who fail to obey traffic signals put not only themselves but other motorists in danger of accidents and serious injuries.

If you have been injured in a car accident caused by a driver who failed to obey a traffic signal, you may be entitled to recover compensation for your injuries. The best thing to do is to consult with an experienced Virginia car accident attorney. Marks & Harrison is a long-established Richmond firm (since 1911) with a practice focused on helping injured people. Take advantage of our free case consultation to find out if you have a case and what damages you may be entitled to claim.

As reported in the findings of an eight-year study conducted by the National Highway Traffic Safety Administration (NHTSA), there were on average 1,578 fatalities each year resulting from two-vehicle traffic crashes at intersections controlled by traffic signals. Approximately 51% of those fatal crashes were caused by drivers who ran red lights. Approximately 29% were caused by drivers who failed to yield the right-of-way at traffic signals.

Running red lights, failing to yield the right-of-way and disregarding traffic signals generally are components of aggressive driving, which involves a combination of destructive driving behaviors. At Marks & Harrison, we believe that aggressive drivers who put other motorists, bicyclists, and pedestrians at risk should be held accountable for the damage they cause. We also believe that injured victims are entitled to recover full compensation.

If you or your loved one has been hurt because another driver failed to obey a traffic signal, our seasoned Richmond personal injury lawyer can help. Our legal team has the knowledge and resources to establish who caused your accident and determine the full extent of your injuries, and we are committed to pursuing the maximum compensation you are entitled to receive. Contact our firm to find the dedicated legal advocate you need.