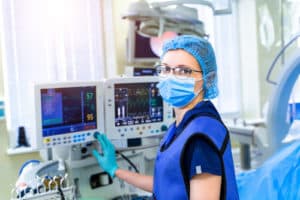 Bair Hugger Warming Blankets use forced-air heating to keep patients warm during surgery. Although the Bair Hugger system is still widely used, lawsuits have been filed throughout the country by those who claim they have suffered serious infections caused by the medical device.

If you have developed a serious infection after undergoing joint replacement surgery during which Bair Hugger therapy was used, you may be entitled to file a claim for compensation against the manufacturer of the device. The product liability lawyers of Marks & Harrison can help. We serve clients in Richmond and throughout Virginia. Call us today or submit our online form to schedule a free consultation.

Bair Hugger Inventor Warns Against Use of Device

The Bair Hugger system hit the U.S. market in 1988. Since that time, it has been used on more than 180 million patients and is currently used in more than 80 percent of U.S. hospitals.

Dr. Scott Augustine invented the Bair Hugger system. However, he now states publicly that the device should not be used on patients undergoing surgical implant procedures, including those that involve hip, knee and heart valve implants.

In 2002, Dr. Augustine resigned his positions as Chairman and Chief Executive of Arizant (formerly Augustine Medical), the company that manufactures Bair Hugger. He has since spoken out about the risks associated with use of the device. In particular, he claims that its use can cause the spread of infectious bacteria during surgery.

Although the manufacturer points to numerous studies which have found that forced-air heating is beneficial during surgery, Dr. Augustine argues that none of those studies have addressed forced-air heating for orthopedic surgeries.

The U.S. Food and Drug Administration (FDA) approved the first Bair Hugger in 1987, issued 12 additional clearances to Augustine Medical and two more after the company changed its name to Arizant. Most of the reports received by the FDA involve prolonged heat exposure burns during surgery and cold air blowing during surgery as the result of equipment failure. Despite reported adverse events, no recall has been issued for the device.

How the Bair Hugger is Used

During surgery, a majority of patients suffer hypothermia, when the body loses heat faster than it can produce it. Hypothermia during surgery can cause complications, including blood loss and infections. Dr. Augustine developed the Bair Hugger system as a method of treating hypothermia.

The system involves warming units that filter and force warm air through disposable blankets that cover the patient before, during and after surgery. These blankets use pressure points to keep heat from reaching certain areas of the body with a greater susceptibility to burns or pressure sores.

Drain holes in the blanket pass fluids through the blanket surface to the linen underneath to help prevent cooling caused by moisture evaporation and softening of the skin. Although disposable blankets help prevent patients from transmitting infections to other patients, they are not designed for use within a sterile surgical field.

In recent years, concerns have been raised about risks associated with Bair Hugger Warming Blankets.

A study published in November 2011 in The Bone & Joint Journal found a “significant increase in deep joint infection” associated with use of the forced-air heating device during simulated lumbar spinal and hip replacement surgeries.

Another study, published in February 2013, found that the device created “tornado-like vortexes” that “sucked contaminated air from the operating room floor and deposited it over the surgical wound.”

Augustine gave a presentation in 2015 in which he stated that exposure to contaminated air during hip or knee implant surgery could cause patients to suffer deep joint infection. According to the physician, this can lead to:

Arizant, the Bair Hugger manufacturer, as well as any other manufacturer of medical devices, has a duty to the public to investigate all safety concerns and issue a recall if necessary. Any manufacturer that fails in that duty should be held accountable for the harm its defective devices cause.

If you have developed a serious infection or other complications that you believe were caused by use of the Bair Hugger Warming Blanket during orthopedic surgery, you have the right to pursue compensation for your injuries.

A time limit imposed by law known as a statute of limitations applies to defective medical device injury lawsuits. If you fail to bring a claim during that specific time period, your claim could be forever barred. It is in your best interest to consult with an experienced product liability lawyer as soon as possible after you become aware of your injuries.

The defective medical device lawyers at Marks & Harrison have successfully handled a wide range of claims for injured people throughout Richmond and Virginia. We know which experts to hire to examine the cause of your injuries and the extent of your damages.

Contact us for a free case consultation. We can advise you as to whether or not you have a case and what damages you may be entitled to pursue in a claim. If a Bair Hugger system or any other medical device has caused you injury and pain, you can be rest assured that our dedicated legal team will aggressively seek the maximum compensation you are entitled to receive.